Famed pitmaster and entrepreneur Aaron Franklin announced an offset smoker was in development in 2017. An email list for more information on the smoker line, branded as Franklin Barbecue Pits, quickly grew to more than 70,000 people.

Over Labor Day weekend this year the pits officially began selling at dealer locations, starting at Texas Star Grill Shop in Houston. Since then, some of the leading barbecue stores in the country are on board including Gentry’s (FL), BBQ Island (AZ), Proud Souls (CO), and Northern Fire (MN).

Aaron Franklin is continuing to partner with dealers and building a Franklin Certified Dealer Network for wider distribution of these high quality smokers.

I caught-up with Aaron Franklin to talk about his budding dealer network and with Rick Martin from Texas Star Grill Shop to hear the dealer’s perspective on the smoker.

For anyone that hasn’t come across Franklin Barbecue Pits, they are made of 1/4″ and 3/8″ solid American steel and are manufactured in North Carolina and Tulsa, OK. They’re beautifully designed with details that set them apart from other offsets. As a former manufacturing engineer, it would have been much easier (and cheaper) for the cook chamber door to overlay the cook chamber for instance. Add to that the hinges for the door are welded on, so there’s nowhere to hide a door gap difference, and you can tell this is special smoker.

Aaron Franklin and his small team behind the Franklin Barbecue Pit have worked hard since its launch in 2020 to find the right manufacturing partners here in the US. They’re at a point now though that they can support larger scale distribution.

we’re getting our production numbers up pretty high these days. I feel like We’re ready to move on to the next step, and the next step has always been to eventually end up in dealers.

While Franklin BBQ is known around the world today, it started as a grassroots venture with Aaron and his wife Stacy. That grassroots foundation is still something that Aaron embodies and he’s carrying forward into the dealer network for his barbecue pits.

I grew up on local businesses and that’s very much our vibe. Even though it’s more work for us if we manage this certified dealer network, then we build individual relationships with the shop owners, we can kind of customize things, we get to get to know them, and they get to know us a little bit. It just feels a lot more organic. That’s very much who we are.

Aaron’s also cognizant of how the economics change for the dealer and the customer by managing his own network. It’s a much easier business model to go through a third-party distributor, but not only does it take away from the relationships, it adds another expense layer. Despite being a premium priced pit, it’s built with large volumes of steel and high quality, domestic manufacturing, which isn’t cheap.

For the dealer network, much like the characteristics of his restaurant, Aaron is looking to partner with dealers that are passionate about their customers and products.

are they good people or are they just for money and sell sell sell? do they really care about their customers? do they really care about their stores? Do the dealers kind of gets us? i like the kind of real old school hardware shops, and you know just fun little places. also, places that could really push things, you know they’re doing demos and they’re doing events on Saturdays and they’ve kind of got their own following. I think that’s a big thing, so it all kind of factors in together. at the end of day if somebody just feels like a good fit, you know, we’re into it.

He’s also aware of the importance of geography both in terms of territory for dealers in the network and for inventory challenges associated with shipping a big 625 lb, steel offset across the country.

geographically where they’re located we don’t wanna get in anybody’s territory, we’re trying to space things out so everybody has a fair shot.

While Franklin Barbecue Pits have a supply chain advantage by using American steel from the Midwest and American manufacturing, they’re still very sensitive to expanding too fast and not having supply for dealers.

we started off with just Texas because it’s a little tricky, we have to project what we’re going to be able to build, but if the cookers aren’t built yet we don’t wanna really sell them until until we have them, which is a lot. I mean we could be sitting on 300 cookers and need to get them out….I’m worried, I don’t wanna take on too many places and not be able to build the cookers in a timely manner, so we’re just kind of doing a couple (dealers) at a time, getting comfortable, doing a couple more, getting comfortable. we’re kind of dipping into the pool very slowly.

To get the dealer’s perspective of network and the Franklin Barbecue Pit, I talked with Rick Martin, owner of Texas Star Grill Shop, the first dealer to carry the smoker. I asked him about the initial reception.

a lot of people came to look at it, a lot of people are thinking about purchasing it. our initial purchase was ten grills, we sold through that, I actually just came back from Austin because I picked up six more.

Rick has seen the most interest from first time offset buyers, that are interested in the craft of cooking barbecue.

I would say it’s definitely people that are looking to get into the craft. They’ve fallen in love with the pellet grill, learned how to smoke a little bit, they watch a lot of YouTube videos, and they wanna do that.

The fact that Aaron Franklin developed the smoker is a big selling feature. Rick even had a customer buy a Franklin Barbecue Pit specifically because Aaron Franklin had cooked on it at the Southern Smoke charity event. The customer paid full price despite it technically being a used smoker.

Aaron Franklin in Texas is probably the leader of all the trends of Texas BBQ. It is a pleasure to carry this brand and the brand has a high level of trust with consumers.

I asked Rick for any advice he has for dealers thinking of stocking it, but are on the fence, or are uneasy with selling an offset.

I’d recommend they would do it, but they have to be comfortable selling the craft of BBQ. It’s almost similar to craft Beer making shops, where someone will spend whatever it takes to make good beer, and they wanna keep making better beer. well this is the same thing, it’s just about BBQ. Do they want to make the best and be proud of it or do they want to make it OK? that’s how Aaron Franklin got started, it was just kind of going in the backyard and make it better, and better.

Rick sees a move to offsets as a trend in the outdoor cooking market. He thinks that they’ll have a big year in 2023.

I think offset smokers might end up becoming the next trend, which is crazy, but we saw pellet grills really skyrocket and I think they’ve leveled off a little bit, and we definitely see our business on offset is way up. we think next year is gonna be way way up. I think people are just kind of returning to the craft. people had offset smokers, they went to pellet grills and they’re kind of bored with it.

While there is already a great catalog of videos of Aaron Franklin cooking on YouTube, he plans to continue making content featuring the Franklin Barbecue Pit to support the dealer network. He just released a video of him cooking on it ahead of Thanksgiving.

Having a relationship driven network is part of Aaron’s long term goal of maintaining that local feeling community.

long term goal is just to have a bunch of really cool, passionate, little, locally owned shops that can do demos and teach people how to use the cookers. really, my goal is to get that information to the dealers, be it videos or doing whatever. I just think it’s incredible how Franklin BBQ has kinda gotten so big but we’re still so small on the scale, and I kind of hope the same for the Franklin BBQ pits. we can cast a wide net, but still be a little, locally owned company, and I think having that dealer network of like minded people is pretty important to that.

If you’re a dealer looking to be part of the Franklin Certified Dealer Network, you’re best bet is to reach out to Matt Gase (matt AT franklinbbq DOT com). Matt is in charge of the BBQ pit side of the business.

give us a holler, we’re working on it, talk to Matt. just reach out and say “hi”.

While offset smokers are popular items at dealers in the South and Texas, they are hard to come by in Michigan (where CookOut News is based) and other Northern states. It very likely could be a competitive differentiator from big box stores and other dealers to be one of the only shops selling one.

If we look at the map of where we sold the most cookers, the hotspots typically are around Chicago, I think detroit’s a pretty good scene,you know, up North where it is cold outside 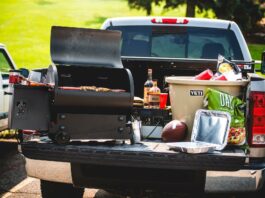 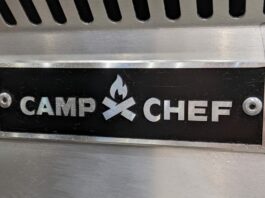 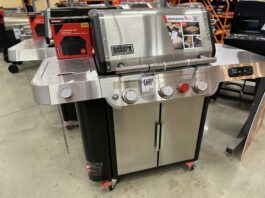 Weber to Announce Fiscal Year 2022 Results – What Else Will...